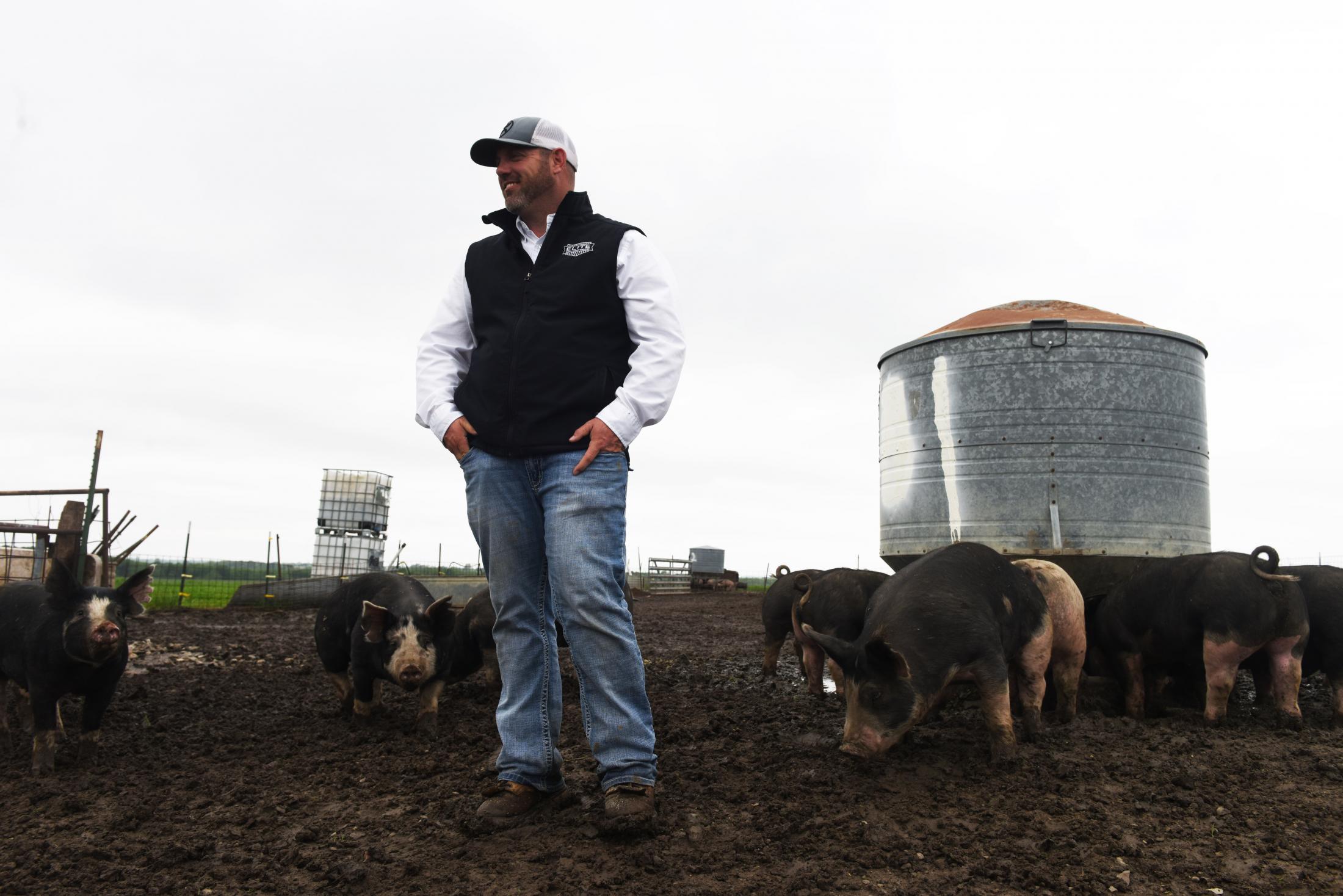 Fred Williams visits the community hog farm in Clarksburg, Missouri on Tuesday, May 19, 2020. Williams, who owns land half a mile away from the proposed Tipton East CAFO, said he has lost faith in the Missouri DNR's ability to protect citizens from the environmental hazards of CAFOs. Williams has become a community leader in protecting the community from health and environmental hazards. 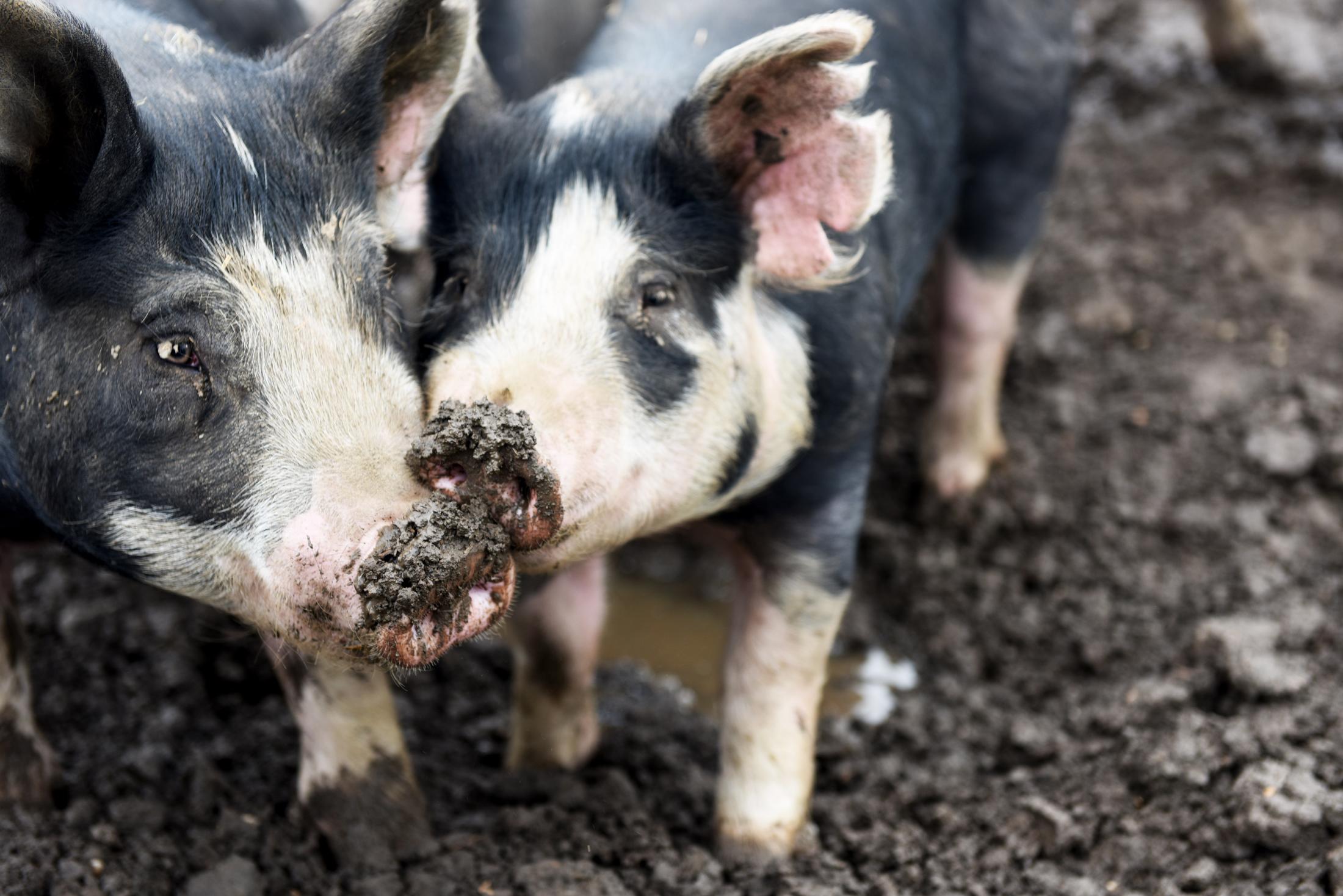 Hogs from the local community hog farm play in the mud on May 19 in Clarksburg. The hog barn houses 45 hogs owned by the Farming Alliance of Rural Missouri LLC., which is made up of community families including the Williams. The dirt-raised hogs are antibody free with no steroids or growth hormones. 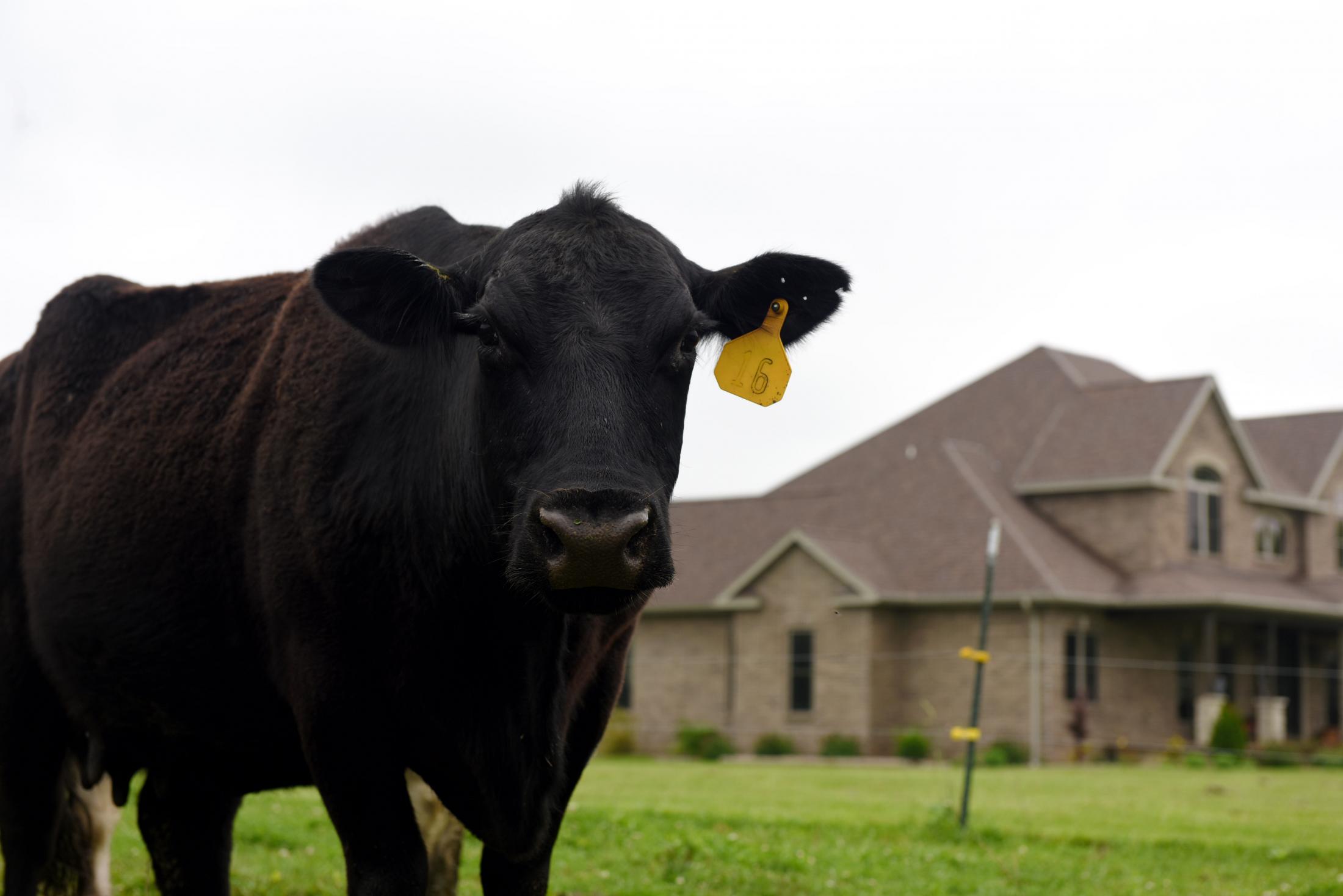 A cow stands in front of the Williams family house on May 19 in Clarksburg. The family built their house about three years ago on the land that has been in their family for the past 70 years. They finished their house 14 months before the Tipton East CAFO announced construction plans. 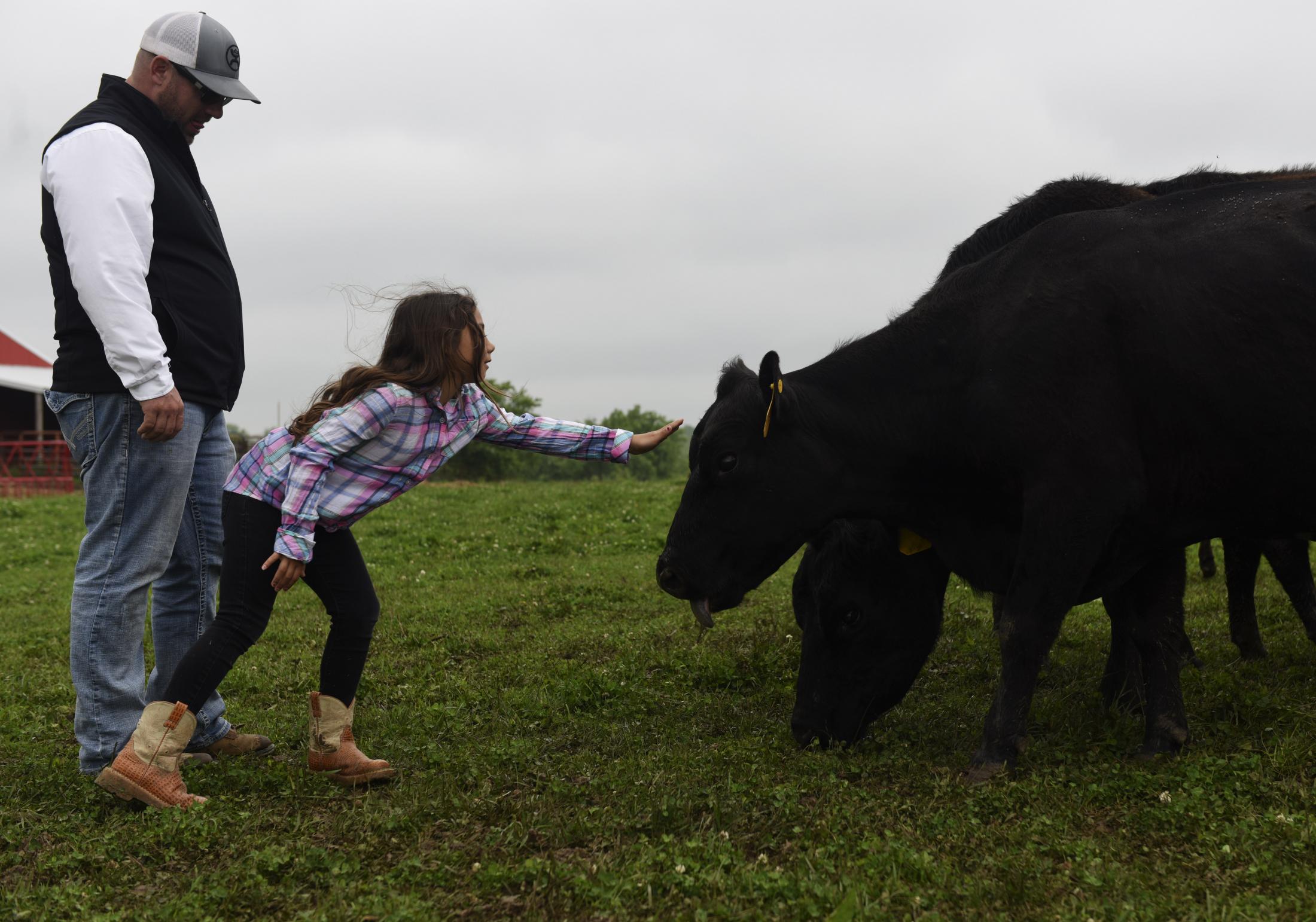 Fred Williams visits the cattle with his daughter Isabelle, 7, on Tuesday, May 19, 2020, on their farm in Clarksburg, Missouri. Williams said he grew up working on his grandparents farm and wanted to give his children the same opportunity to work on the land. 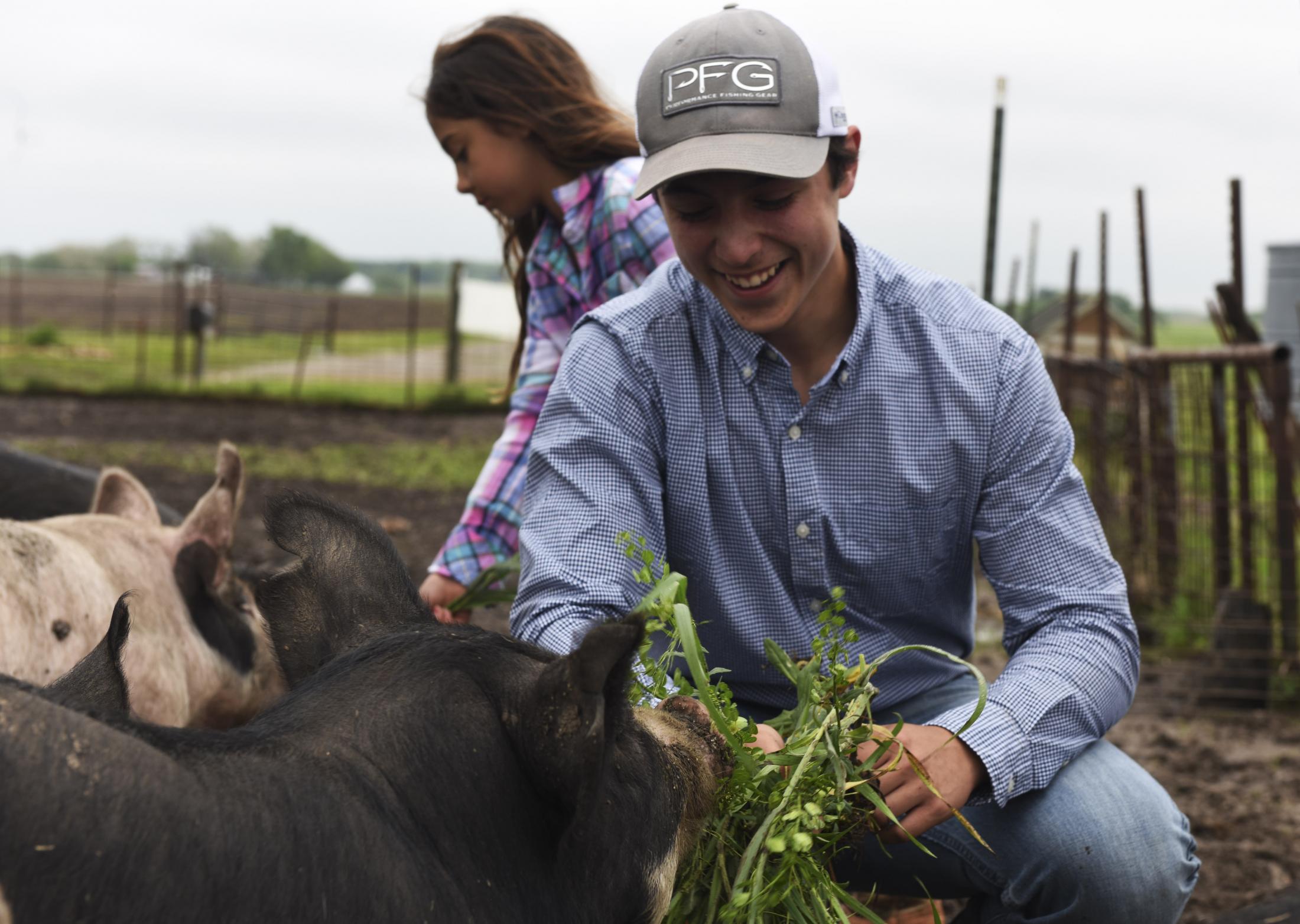 Cody Williams, 15, feeds grass to some hogs on Tuesday, May 19, 2020, at the community hog farm in Clarksburg, Missouri. While Cody and his family collectively share responsibilities of the land with community members, two other local absentee landowners have sold out their land to CAFOs that could pollute the rest of the community’s water supply and livestock. The two landowners are the uncles to Fred Williams, Cody’s father. “It is a real shame that they care more about money than they do about the welfare of the people closest to us,” said Susan Williams, 67, mother of Fred Williams. 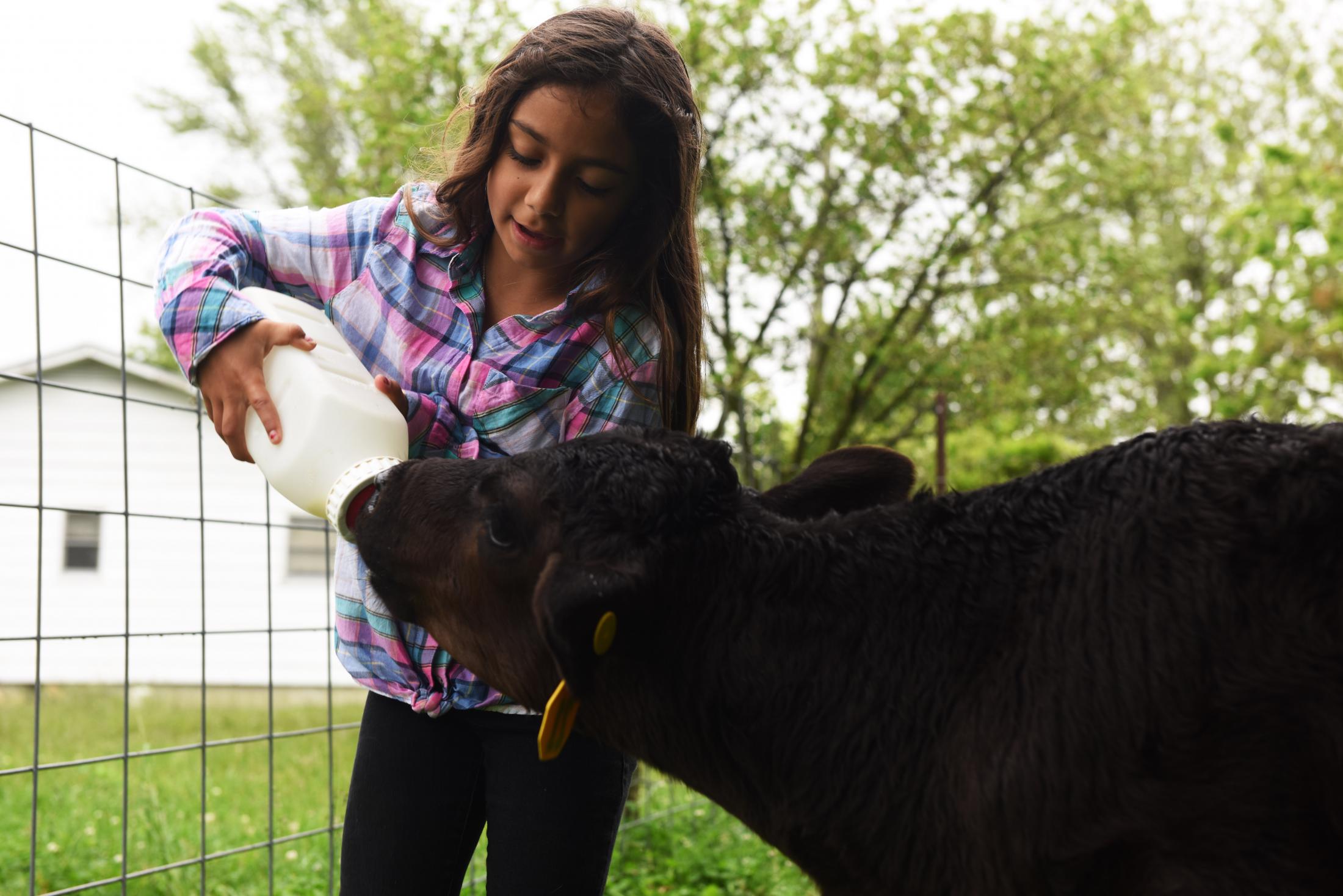 Isabelle Williams, 7, feeds a bottle calf whose mother was not able to raise it on Tuesday, May 19, 2020, on their farm in Clarksburg Missouri. The proposed Tipton East CAFO would cause toxic nitrates to contaminate the water supply for the family and their livestock, Williams said.  Williams said the toxins can make people sick and sterilize livestock which would prevent the sustainability of staying on their farm. 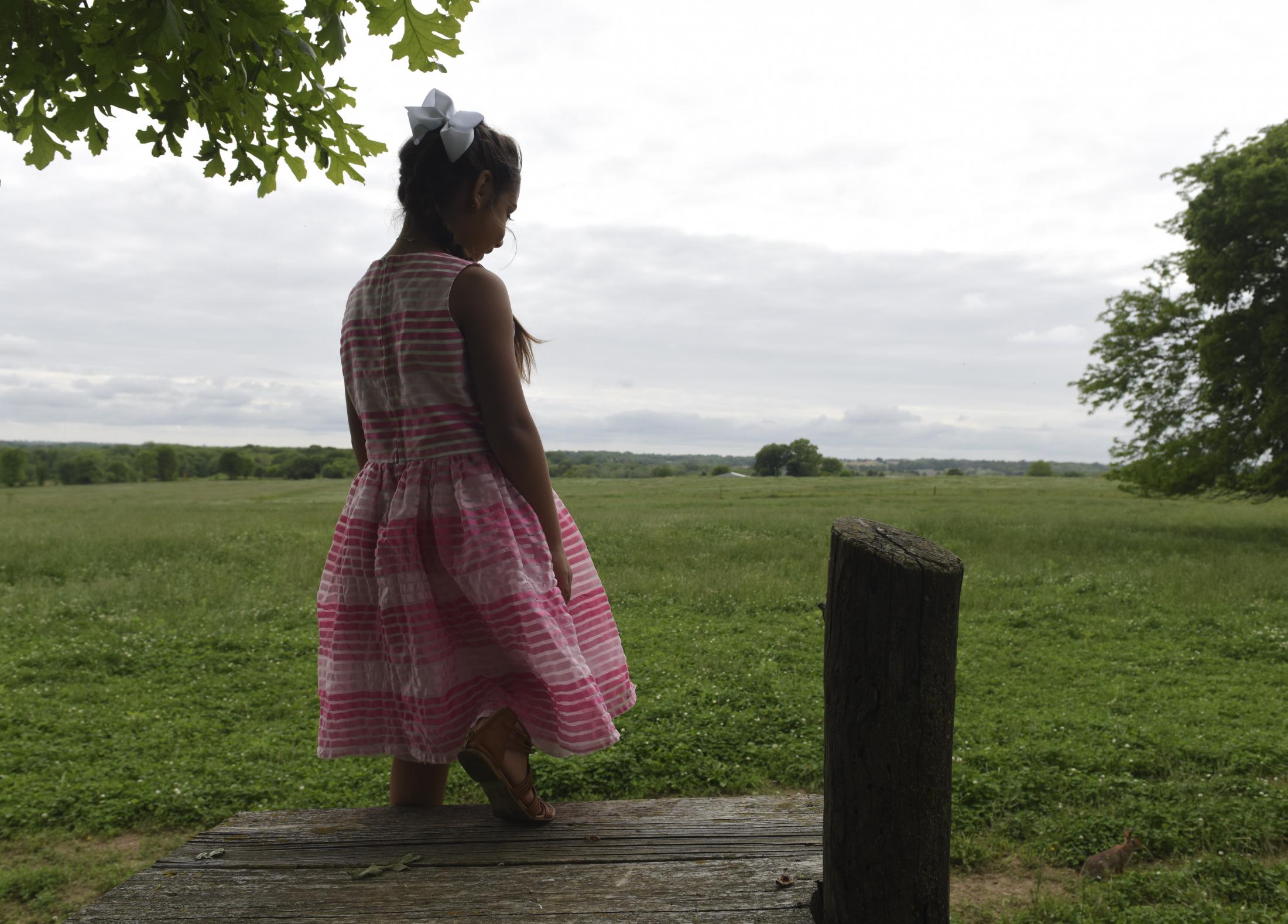 Isabelle Williams, 7, looks at a bunny from the top of stairs that look over the Williams’s land on Thursday, May 21, 2020, in Clarksburg, Missouri. “I don’t think I would like to live in the city; I love playing on the farm and running around and riding my bike with the cows,” said Isabelle. “When I grow up I am going to build a house out here too.” 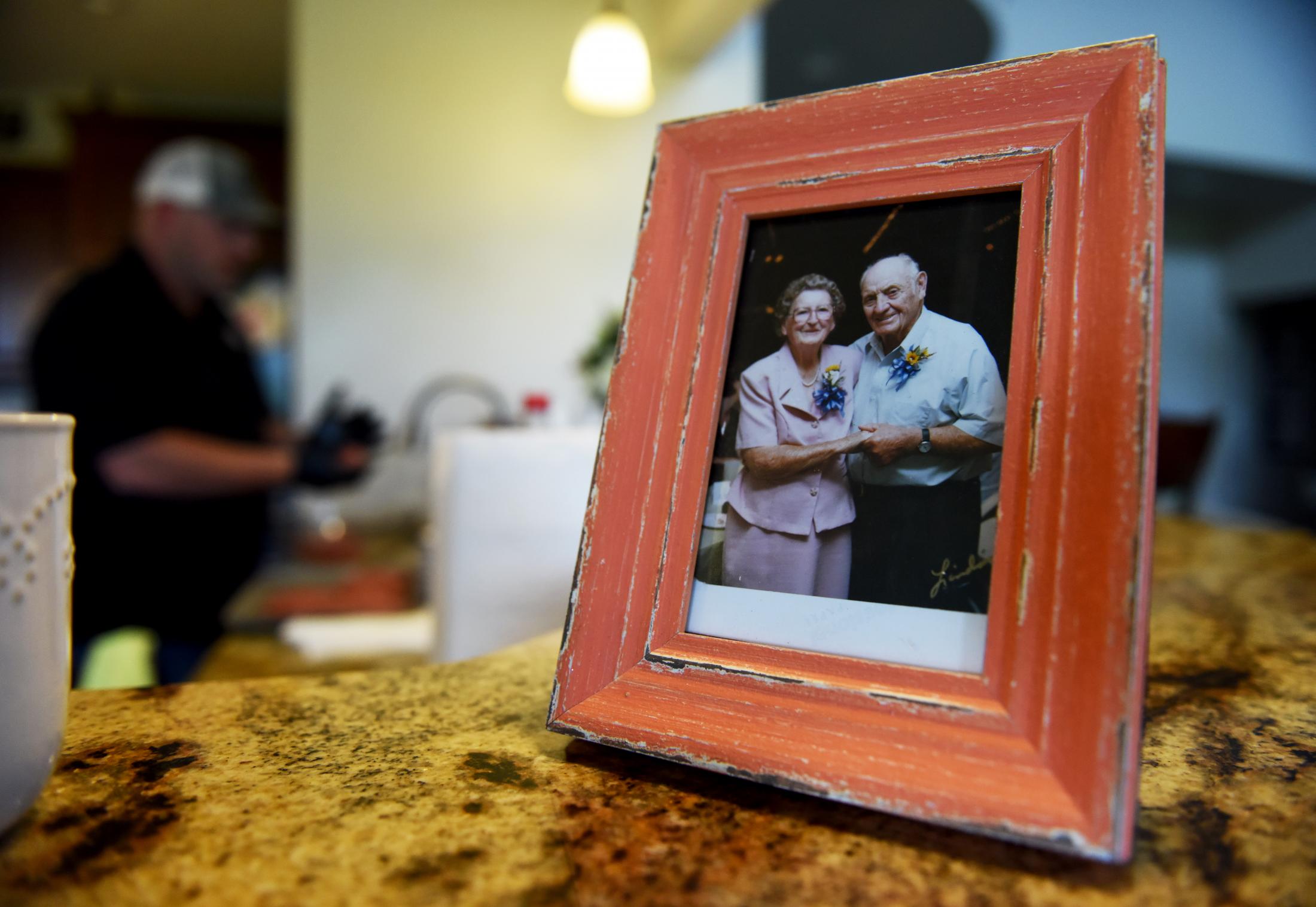 A picture of Fred Williams’ grandparents, Roscoe Gibson and Mary Emma Gibson, sits framed in his kitchen on Thursday, May 21, 2020, in Clarksburg Missouri. His grandparents originally bought 640 acres of land in 1950 which has been kept in his family for the past 4 generations. 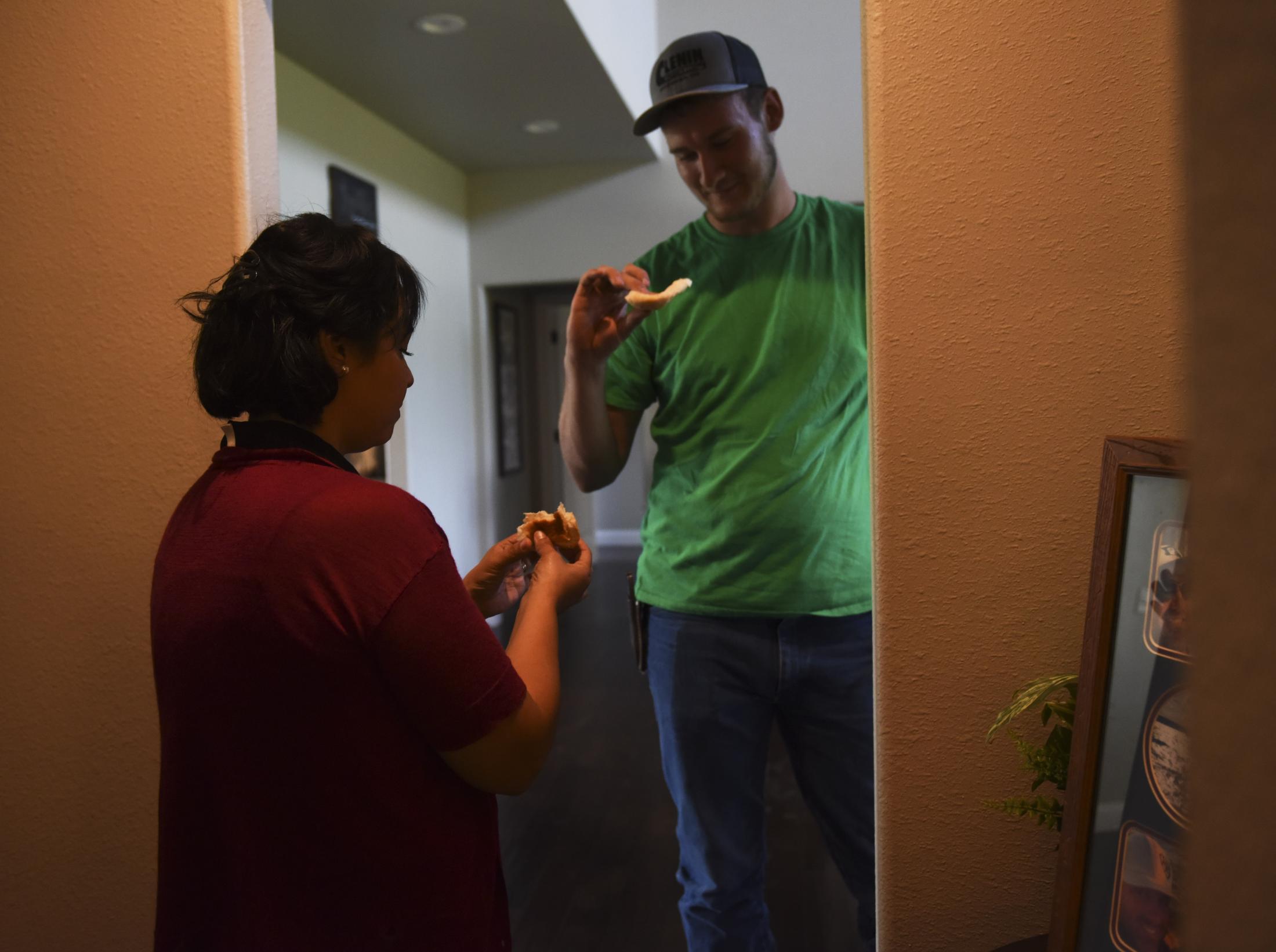 Mary Williams breaks off a piece of bread for another local farmer on Thursday, May 21, 2020, in her home in Clarksburg, Missouri. The Williams have become a public voice for many community members who’s jobs have been threatened by these big agriculture businesses. 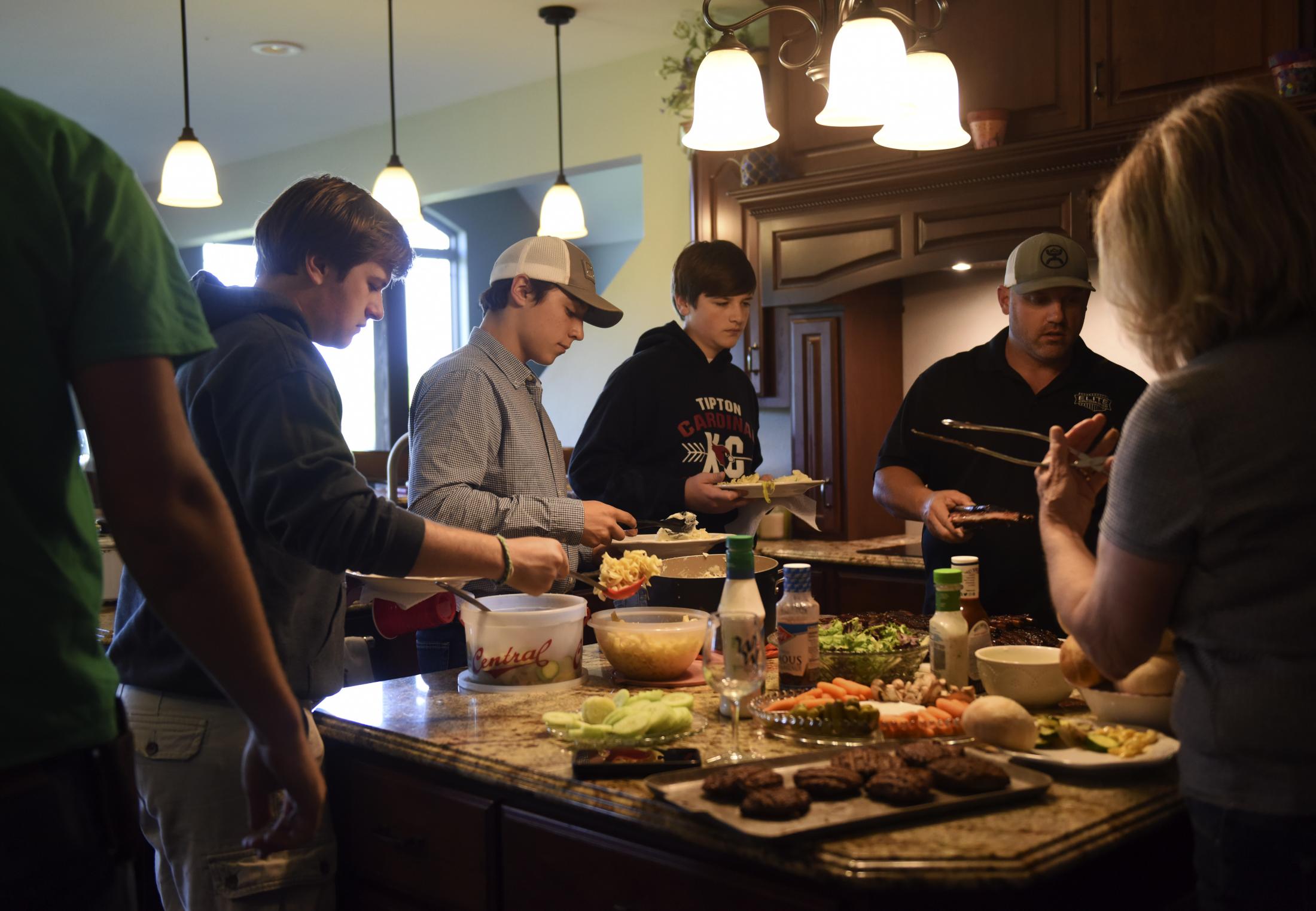 The Williams family hosts a dinner with a few neighbors on Thursday, May 21, 2020, at their home in Clarksburg, Missouri. Most of the food they prepared was homegrown between their neighboring farms. "We have ribs, burgers, salad, corn, some other vegetables, all from our backyards," said Fred Williams. "If you leave hungry that would be on you." 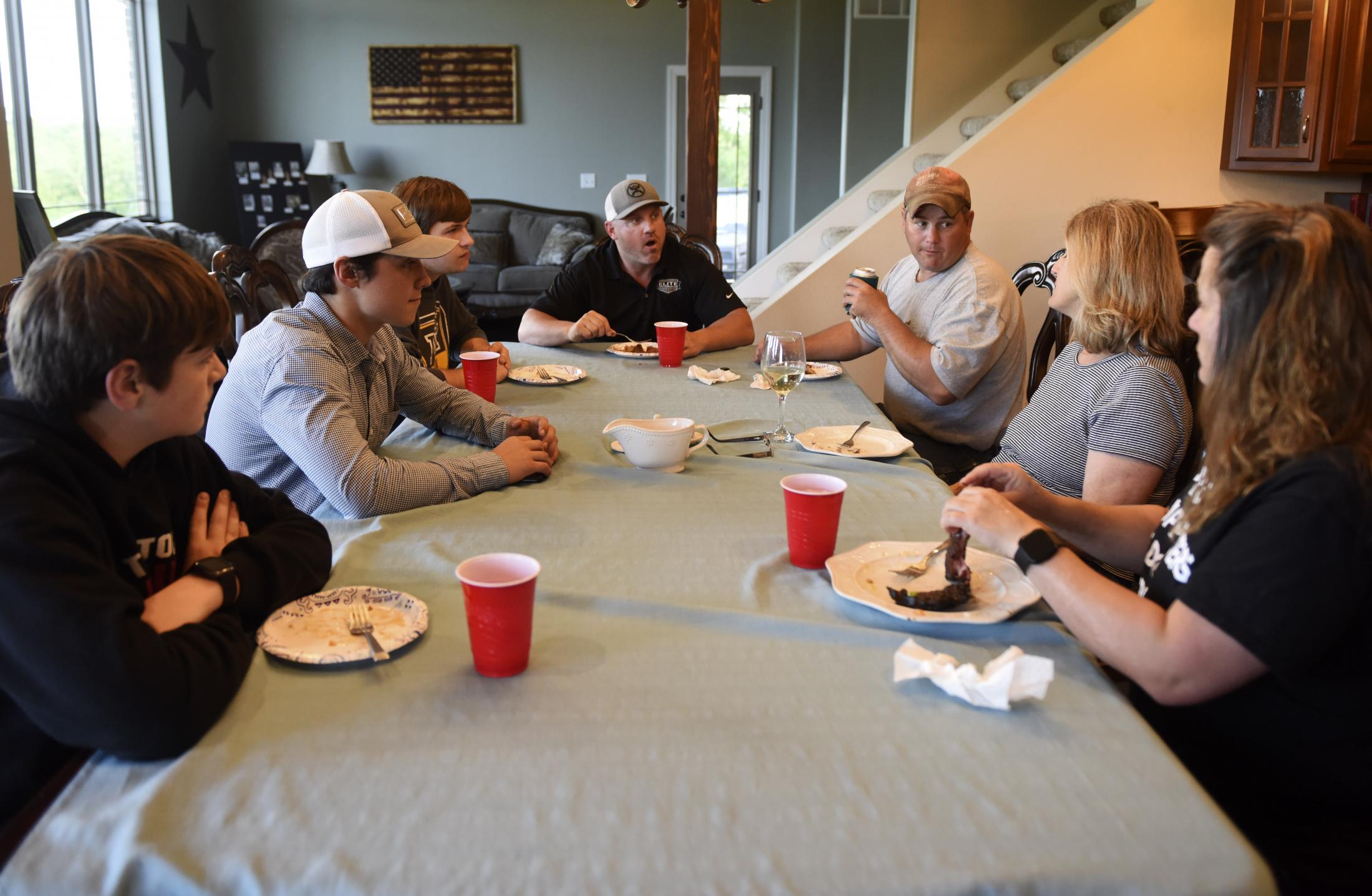 Fred Williams talks with his mother, center right, son, center left, and neighbors last week in their home in Clarksburg. Williams and his family regularly hold community meetings with up to 90 people attending to discuss concerns about the corporate agriculture business in their community. “It’s safer to do here,” Williams said. “We used to have it in public spaces, but people would show up portraying themselves as small farmers who would really be working for these big agriculture businesses.” He and other community members are involved in four court cases to protect community health and land. “We won’t go down without a fight,” said Williams’ mother, Susan. 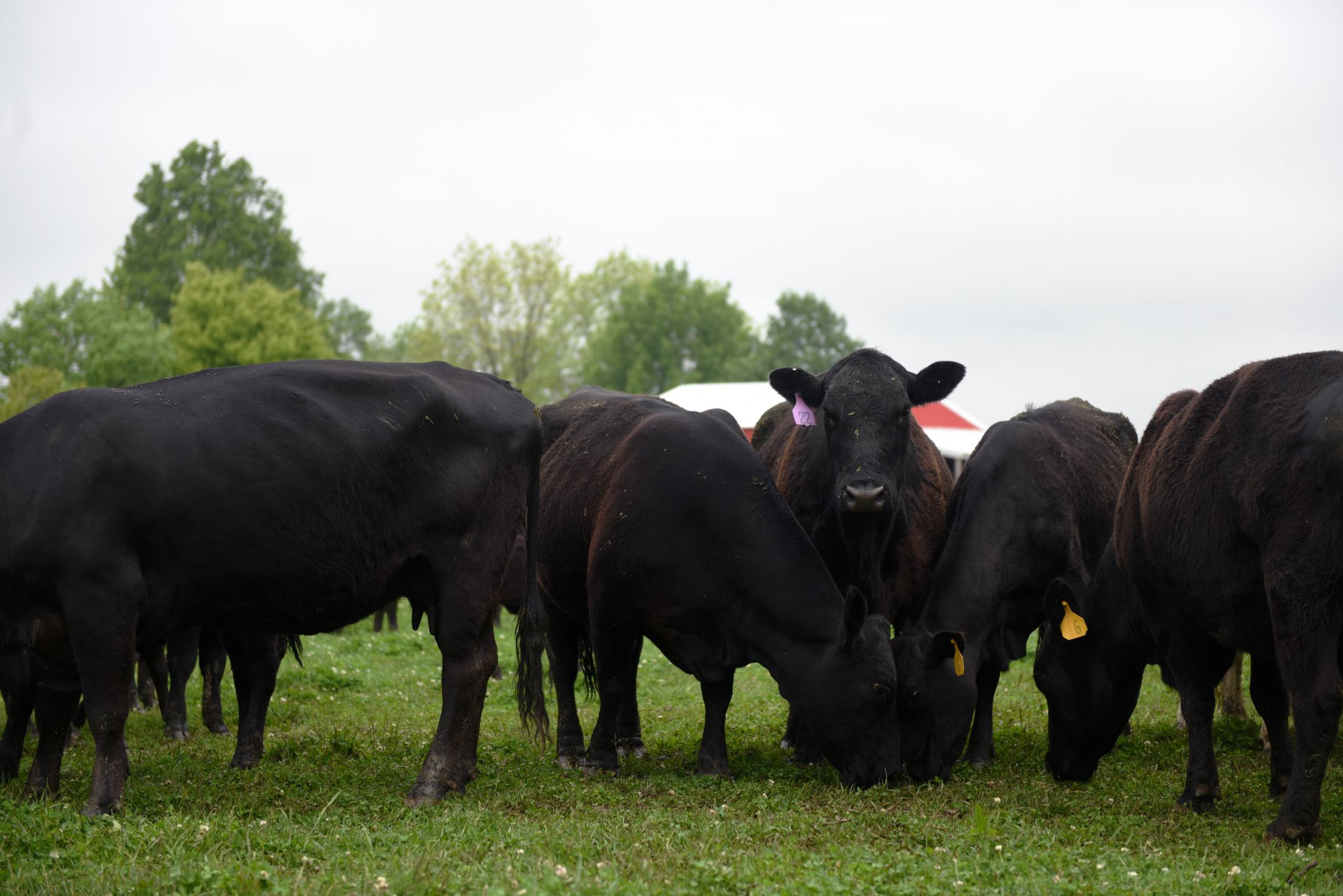