In life, we are all confronted with two fundamental questions – why am I here and what happens next? The uncertainty posed by these questions is often the cause of grief and anxiety that deter us from living a full life.

After a devastating divorce, Margaret Waddell felt like her entire life was unclear. But one night a dream awakened her to the spirituality that has provided her with the guidance she had been looking for.

“I kept going through these different religious spaces… But I ended up in this meadow watching my mother, who had been a large woman during her lifetime, sway her heavy-set hips to a song that I was singing,” Waddell said. “From that moment on, I knew my purpose.”

Waddell says her dream called her to become who she was meant to be in this lifetime. In 2012, Waddell opened her own music studio where she teaches singing lessons to people of all ages. However, another important aspect of her life dedicated to spirituality.

Waddell has known spirituality her entire life. She was raised Catholic and has always taken comfort in the songs, rituals, and promises of the faith. However, over the course of her lifetime, Waddell has embraced learning and expanding her consciousness through other religious paths. Waddell has studied Native American traditions, the philosophy of Buddhist Monks, teachings from the Good Medicine Society, and medical intuitives such as Sobonfu and Malidoma Somé.

“Every religion I have ever experienced tells us versions of the same story; that it is better to live from a place of peace and open-heartedness,” Waddell said. “I believe that there are universal truths in this world and everything is connected.”

Her spiritual practice has allowed her to develop a closer relationship with the earth, her ancestors, and her community. She regularly works on a piece of land on Crystal Lake in Stover, Missouri. In addition to the land connecting Waddell to nature, it has been in her family for 5 generations, connecting her to the family that came before her.

“When I am here I feel at home,” Waddell said. “I want to add to what my ancestors have given to me and leave something for those who come after me. I want to create a place where people can come together and enjoy the beauty of this world we share.”

Creating a sense of community is another important aspect of Waddell’s purpose.

“We need people more than we know,” Waddell said. “When we share our experiences with people joy is multiplied and grief is divided.”

Waddell spends a lot of her time engaging with communities to share in her spiritual beliefs. She regularly holds events that allow the community to share in times of loss and organizes chants to signify times of change.

“No one is ever truly alone,” Waddell said. “We need to remember that life doesn’t just end, it lives on in the connections we create throughout our time on earth.” 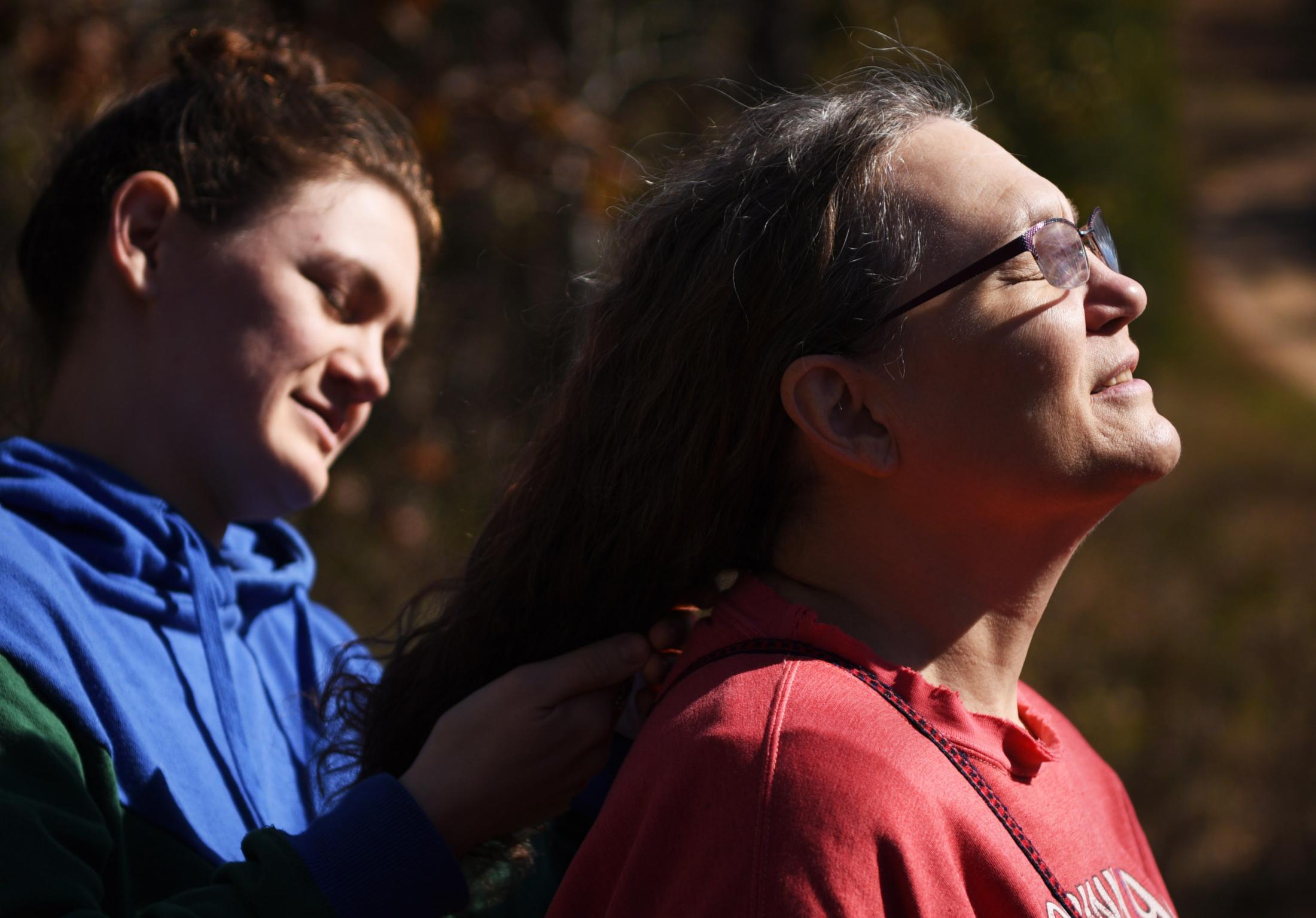 Margaret Waddell soaks in the sun and warmth as Hannah Satterwhite pulls back her mother's hair on their land at Crystal Lake on Nov. 3, 2019. The property has been in Waddell's family for 5 generations. "This is the first place I have ever truly felt at peace with myself," Waddell said. "Staying connected to nature and my ancestors is what makes me feel whole." 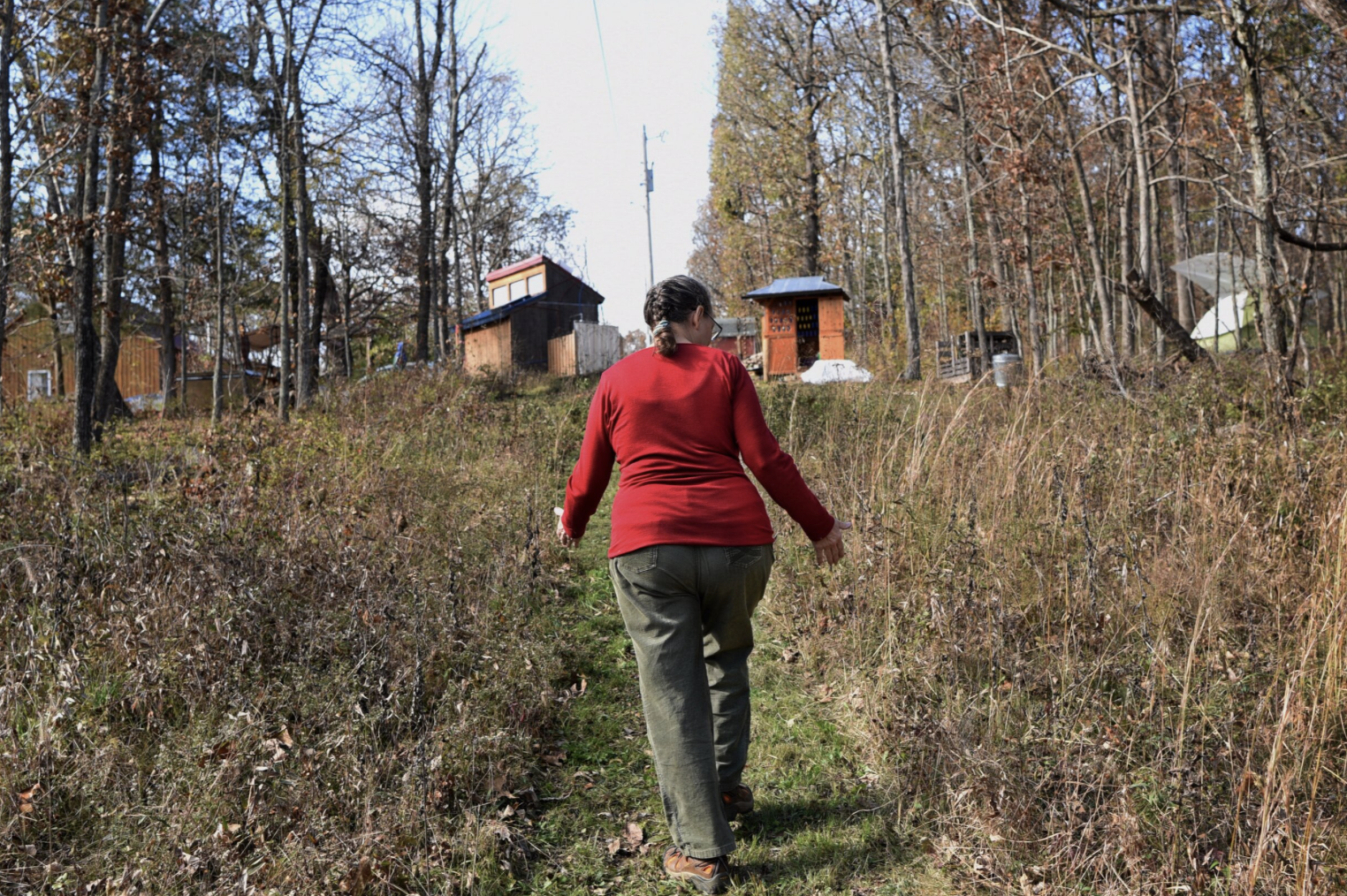 Margaret Waddell walks toward the camping ground on her land at Crystal Lake on Nov. 3, 2019. The one-room cabin with a screened-in porch originally built on the land burned down in a fire 13 years ago. However, Waddell has spent as many weekends as possible camping and working on the land in an effort to rebuild her favorite place by hand. “I have always wanted to rebuild the cabin in the spirit of my great-grandparents,” Waddell said. “It is the greatest goal of my life to create a place where family and friends can gather to spend time together in nature... which inspires music and storytelling and a sense of community.” 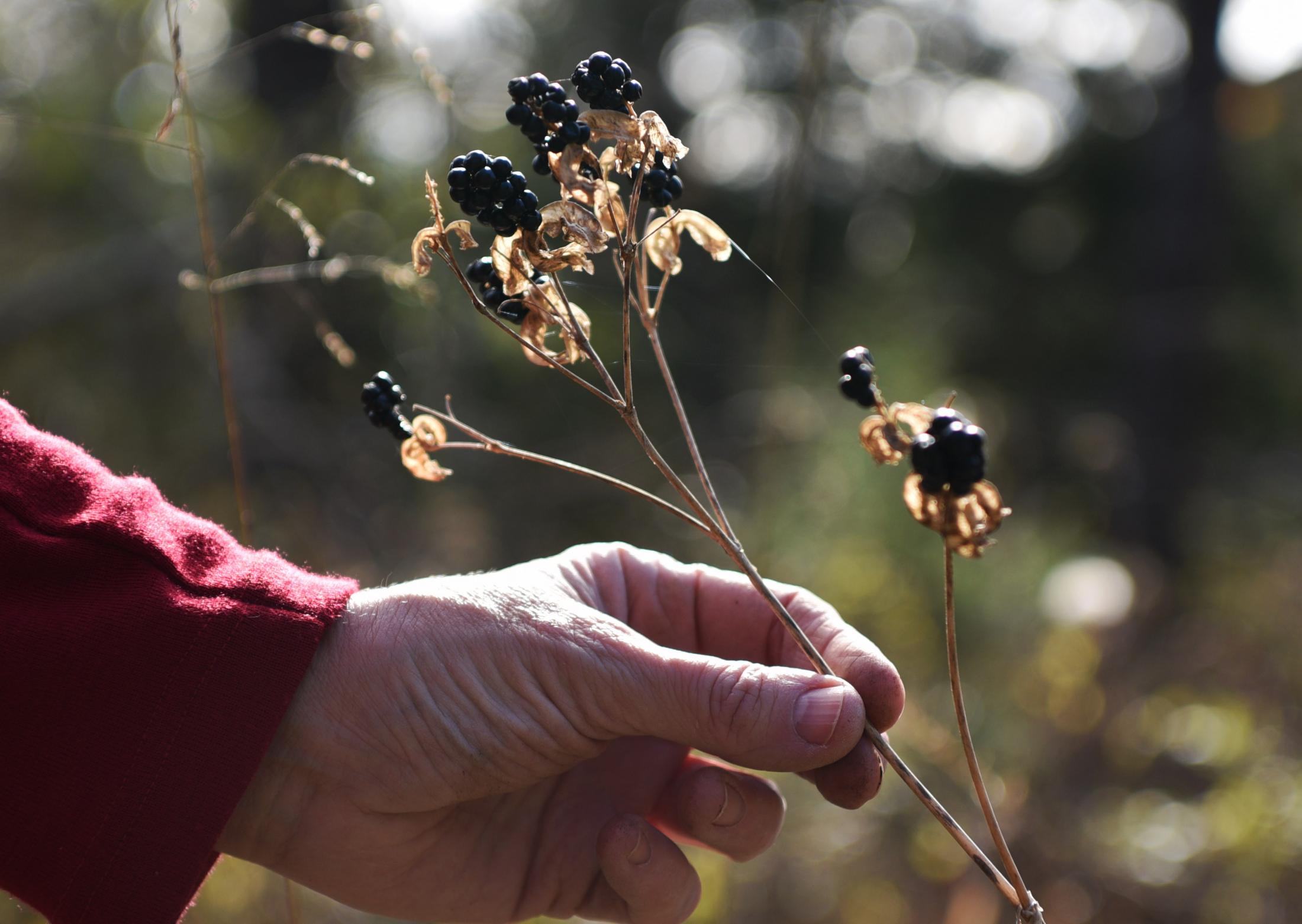 Margaret Waddell picks a wild blackberry plant on her land at Crystal Lake on Nov. 3, 2019. “Being out here reminds me of how connected everything is,” Waddell said. ‘Ancient wisdom describes human beings as having five layers of experience: the environment, the physical body, the mind, the intuition, and our spirit. If we surround ourselves with a healthy environment, it has a positive impact on all other aspects of our existence.” 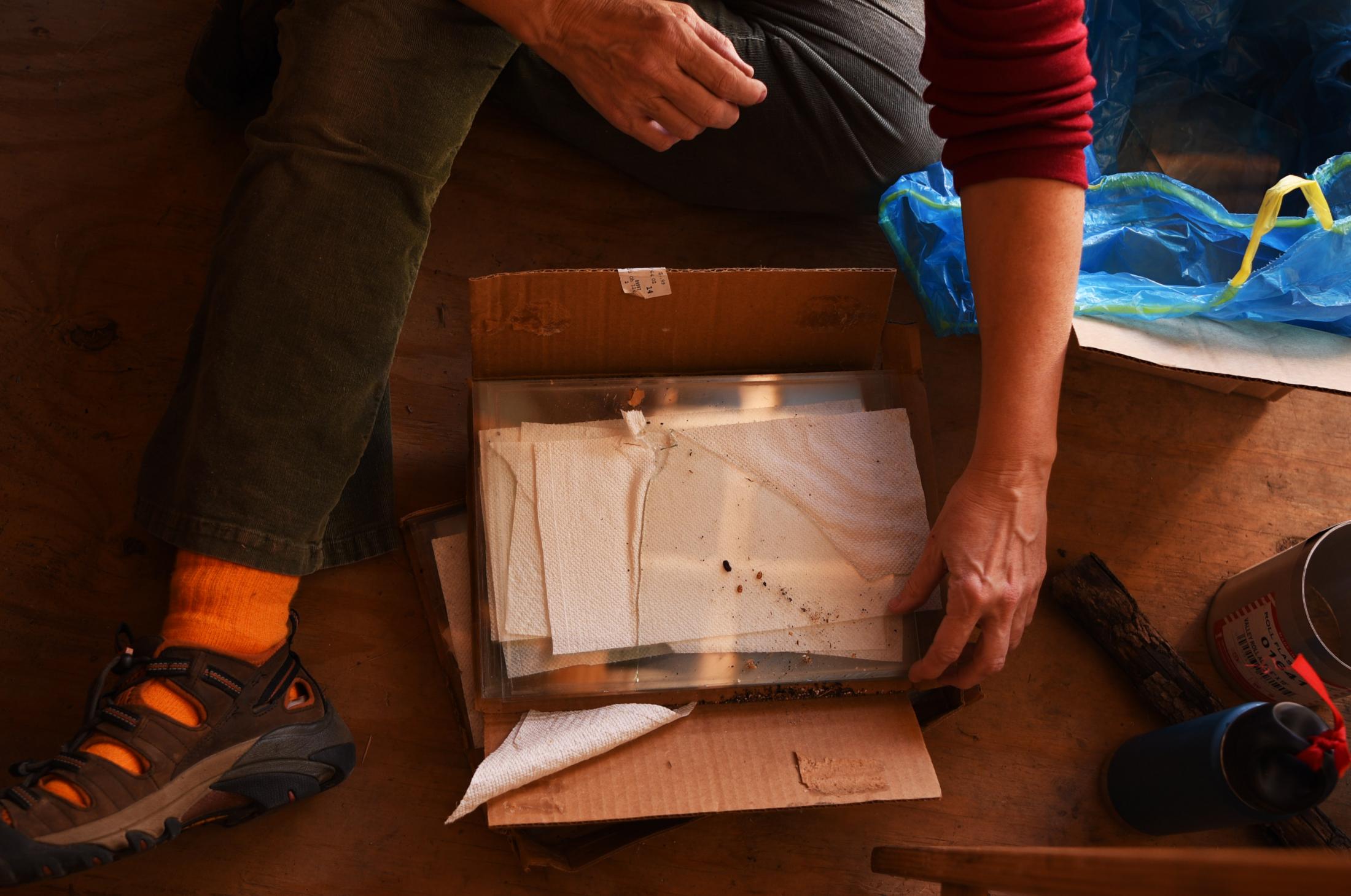 Margaret Waddell sifts through a box of glass as she cleans out the shed on her land at Crystal Lake on Nov. 2, 2019.  Waddell built the shed herself to store various supplies and a collection of remnants from the original cabin including glass, melted plates, and windows. “I want to incorporate these relics into my life as much as I can,” Waddell said. 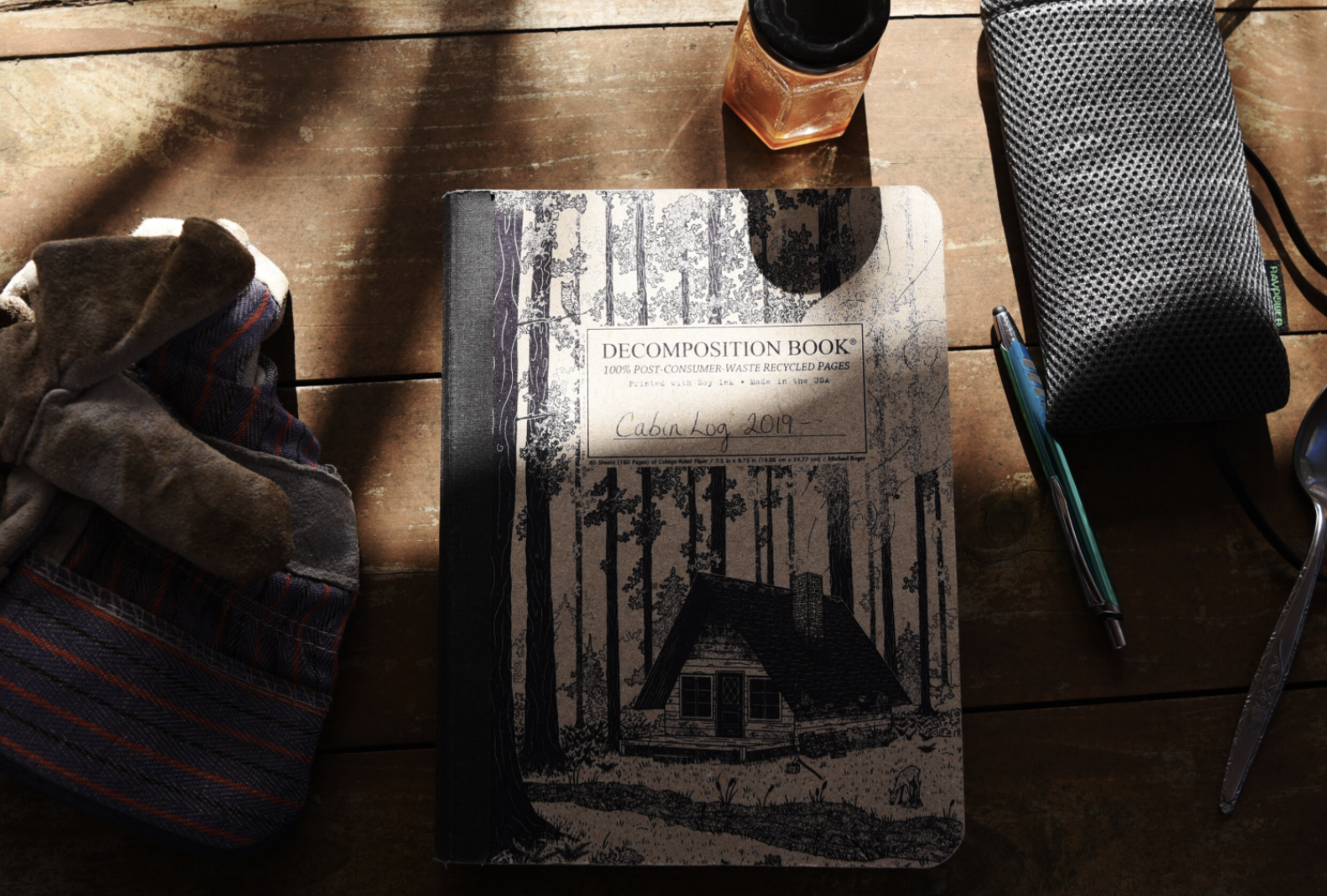 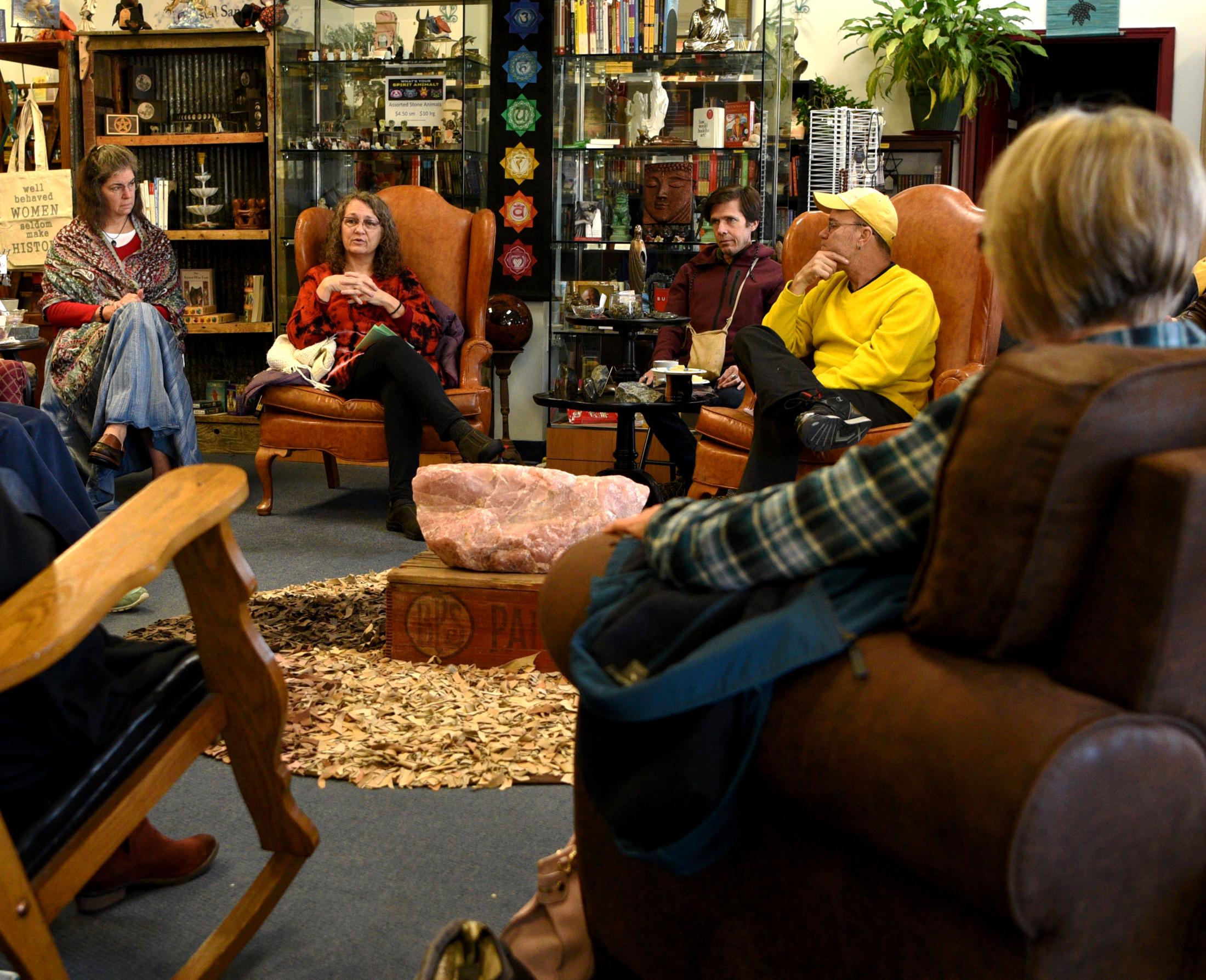 Waddell leads a discussion on “non-western ways of processing grief” at Heart, Body, and Soul’s event called Coffee and Conversations on Nov. 2, 2019, in Columbia, Missouri. Community member’s discussed grievances that ranged from just getting older to the loss of a loved one. “Life is difficult to manage individually,” Waddell said. “Westen ways of handling hardships too often isolates people with their problems but that is a time we need to rely on community more than ever.” 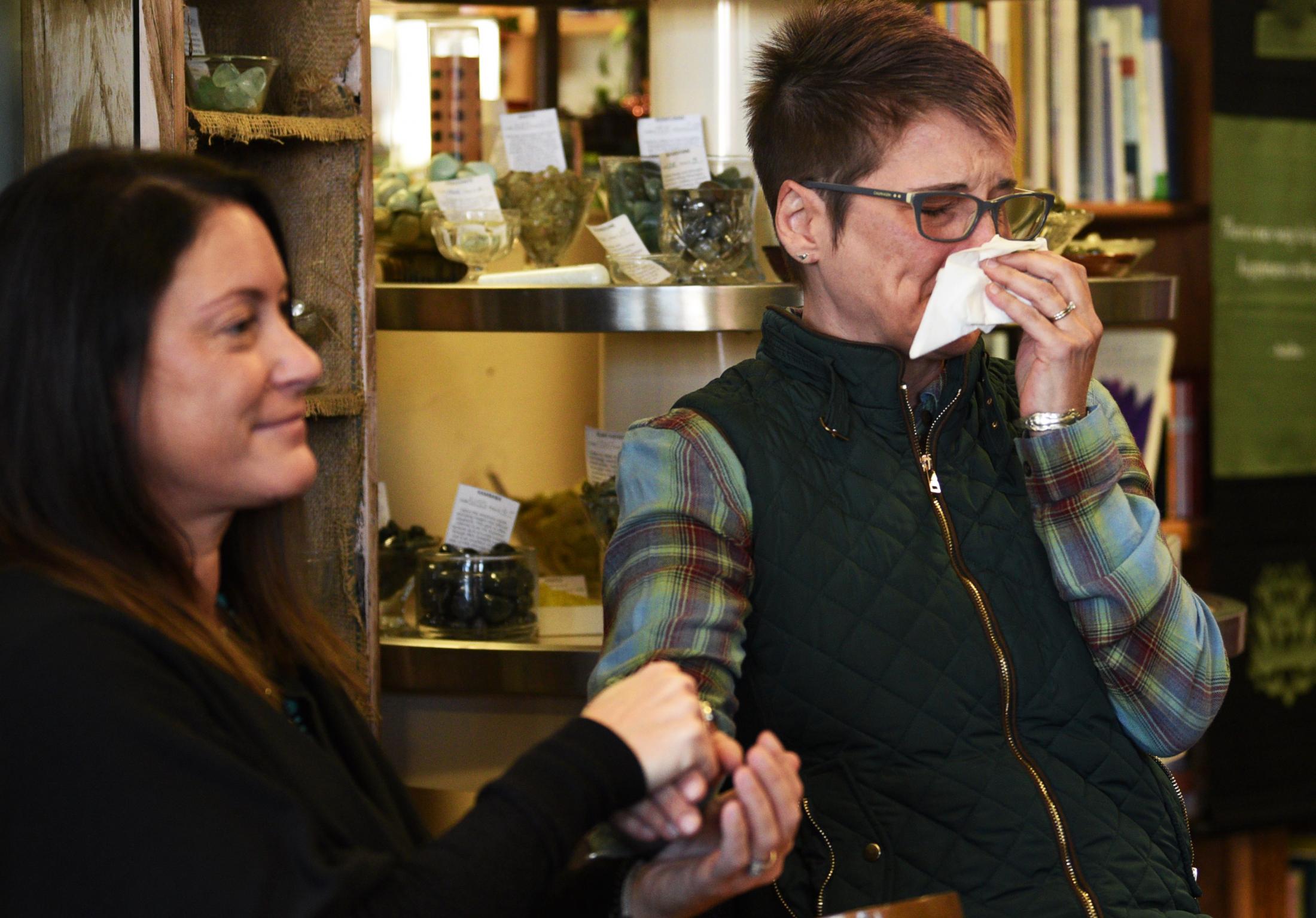 Megan Sondgerath Hall is comforted by the simple touch of her friend Tawnee Benner during a discussion on grief on Nov. 2, 2019, at Heart, Body, and Soul in Columbia, Missouri. Hall’s mother was diagnosed with cancer in February and passed away in August leaving her with a large amount of debt and tasks to take care of while trying to process the loss. “It isn’t just this overwhelming sadness,” Hall said. “I am angry with my mother for leaving me like this. I can’t just mourn her passing, I have to relive it every day I pay the next bill.” 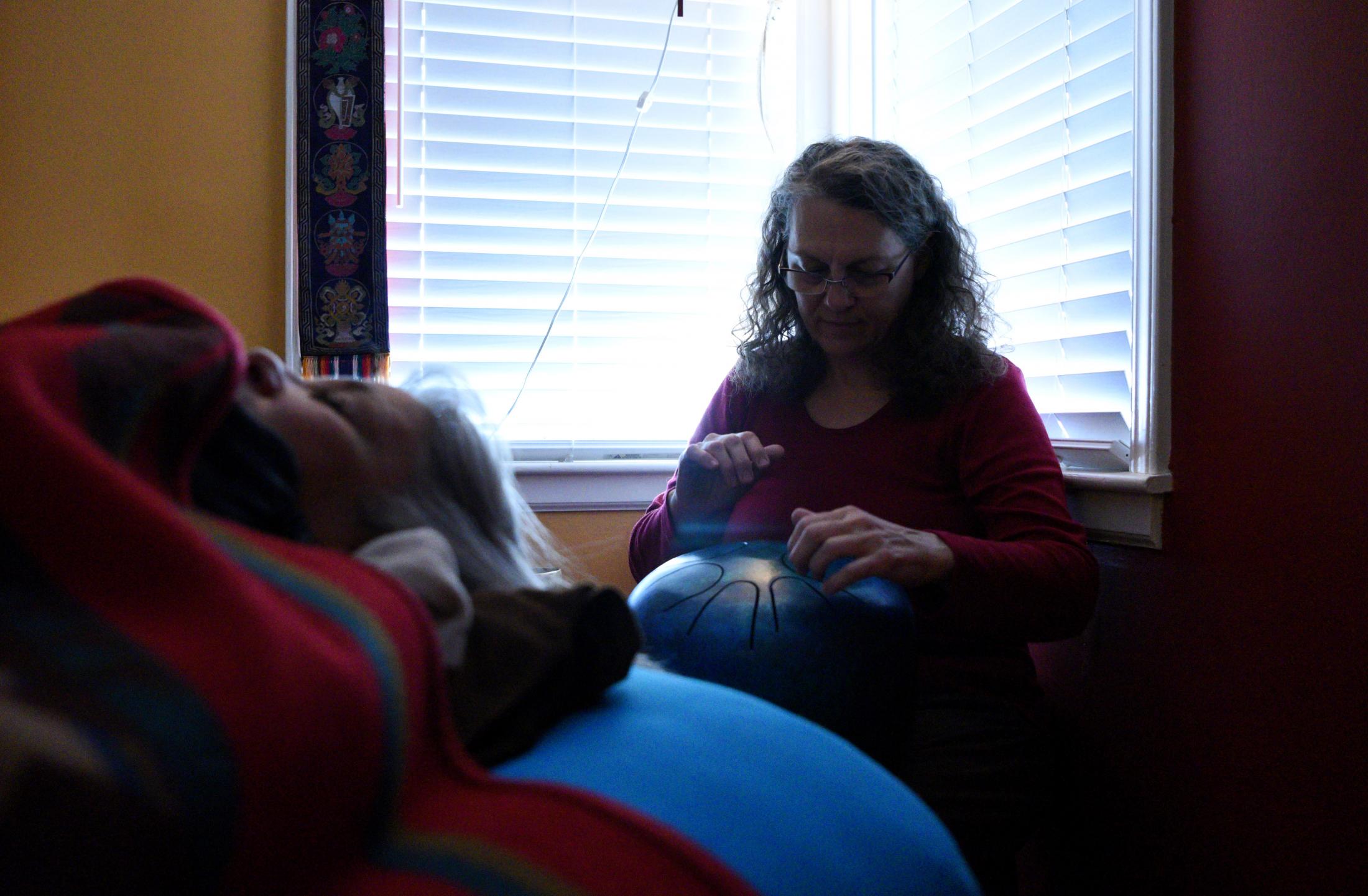 Margaret Waddell plays the steel tongue drum in a sound healing session for a woman suffering from excessive migraines at Hummingbird Studio in Columbia, Missouri on  Nov. 8, 2019. Sound and music have been used since ancient times for healing and transformation. Everything is vibration and you tune your body like you tune an instrument - Sound healing allows your body to heal itself by slowing down your brain waves, which affect every cell in your body, shifting them from diseased to be in ease. “It is the most beautiful holistic experience,” the woman said, “I always feel so much more at peace after my session.” 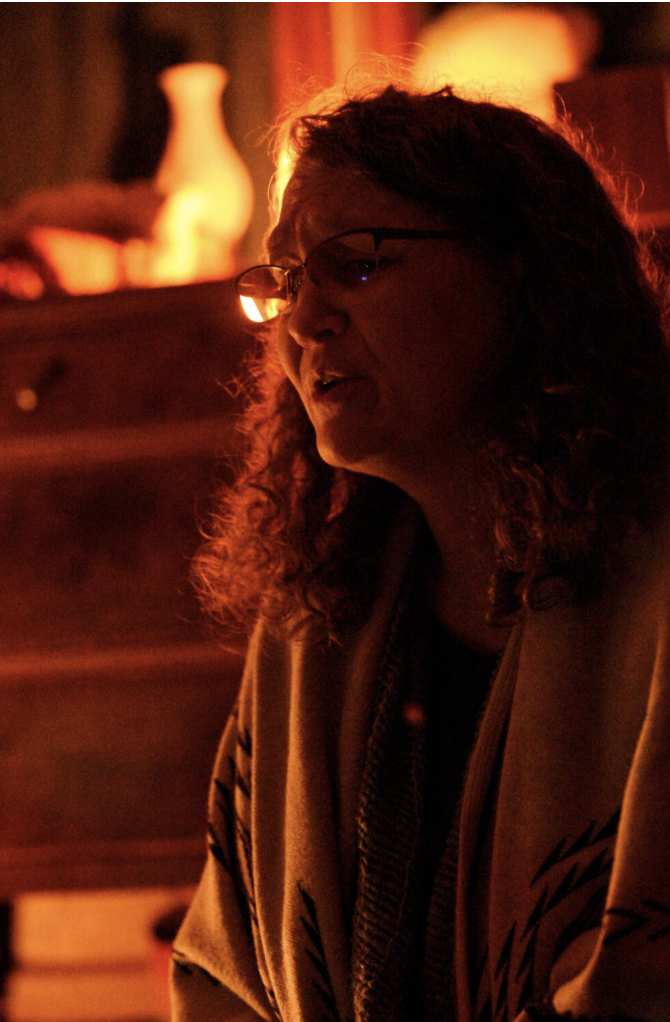 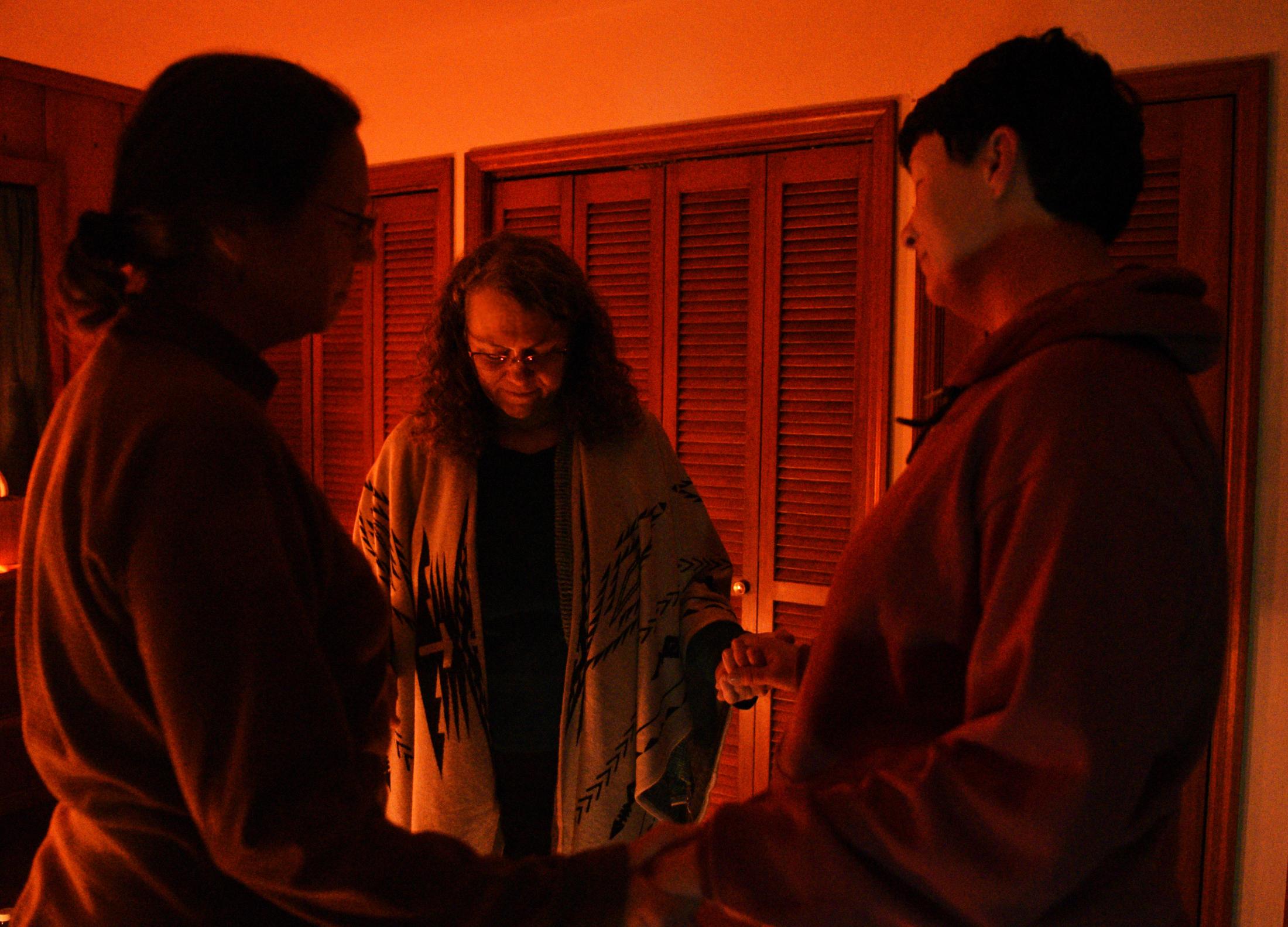 Therese Folsom (left), Margaret Waddell (center) and AB Gerke (right) hold hands in the Full Beaver Moon Chant for Peace held on Nov. 12, 2019, at Hummingbird Studio in Columbia, Missouri. Chanting is an ancient technique for focusing and uplifting the mind and soul into higher states of consciousness free from worries and anxieties. The full moon intensifies the positive vibrations of chanting which magnifies the healing effect on participants and the environment. “Singing unites people everywhere,” Waddell said. “It is transcendent of time and place transforming it into a sacred space.”